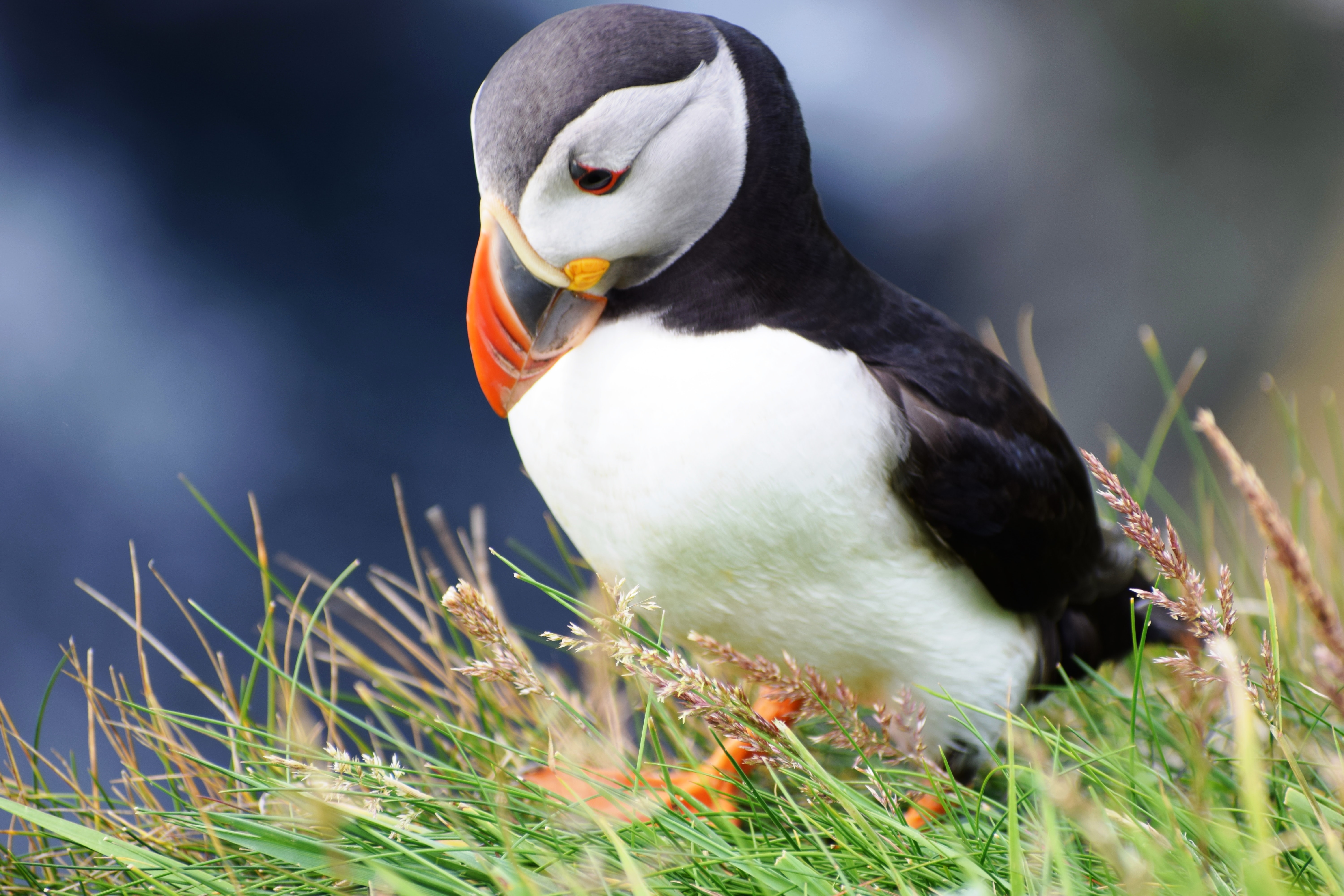 A unique expedition cruise to some of the most remote and pristine waters of the world. As with all expeditions; nature prevails. Weather, and ice and sea conditions, sets the final framework for operations. Safety and unparalleled guest experiences are at all times top priorities. All indicative itineraries are continuously evaluated for adaptions, whether this is due to constraints the elements unexpectedly presents – or exciting possibilities nature and wildlife offer. That is why we call it an expedition. 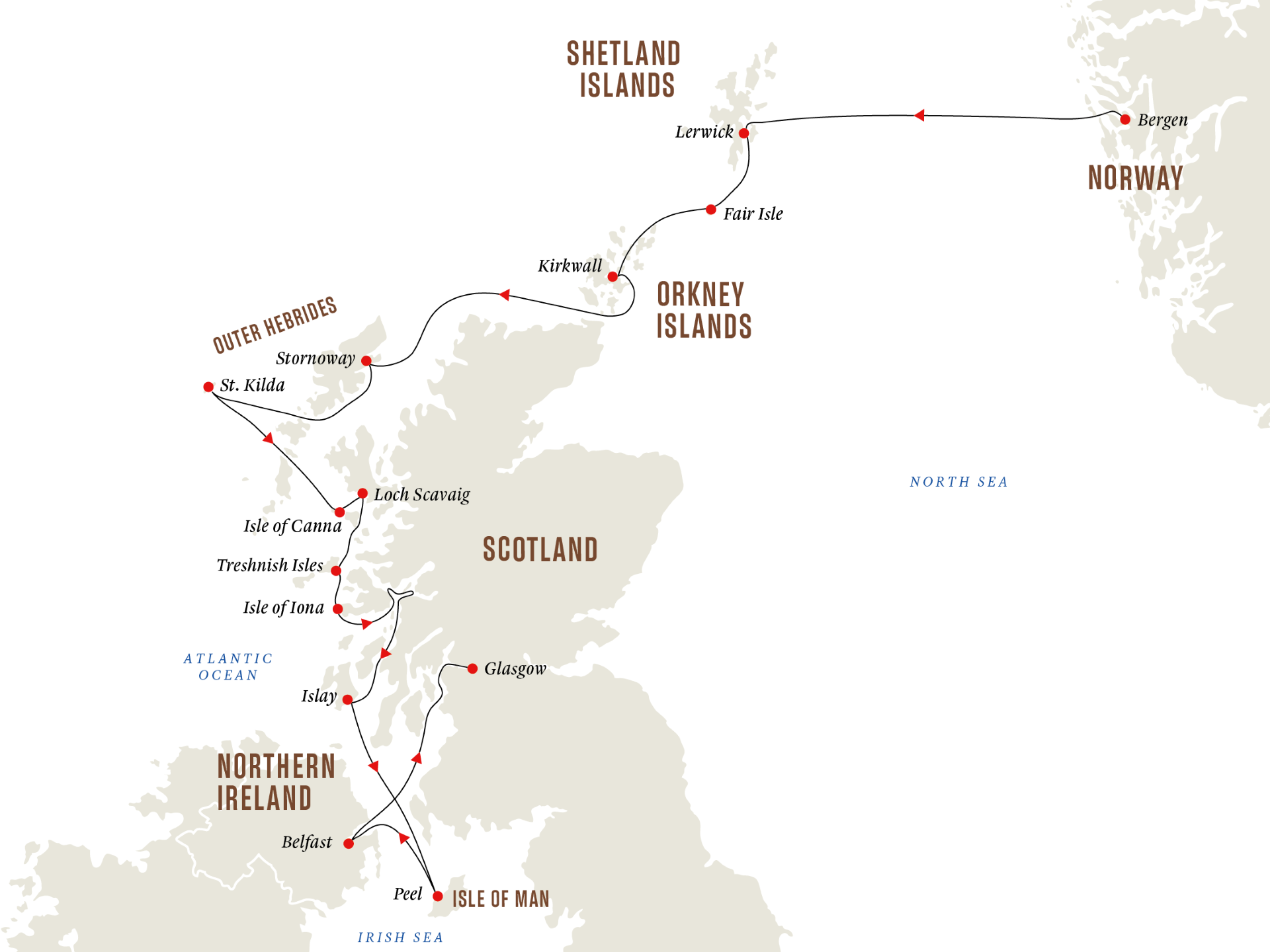 • Engage in bird and wildlife spotting, especially in St. Kilda and the Treshnish Isles 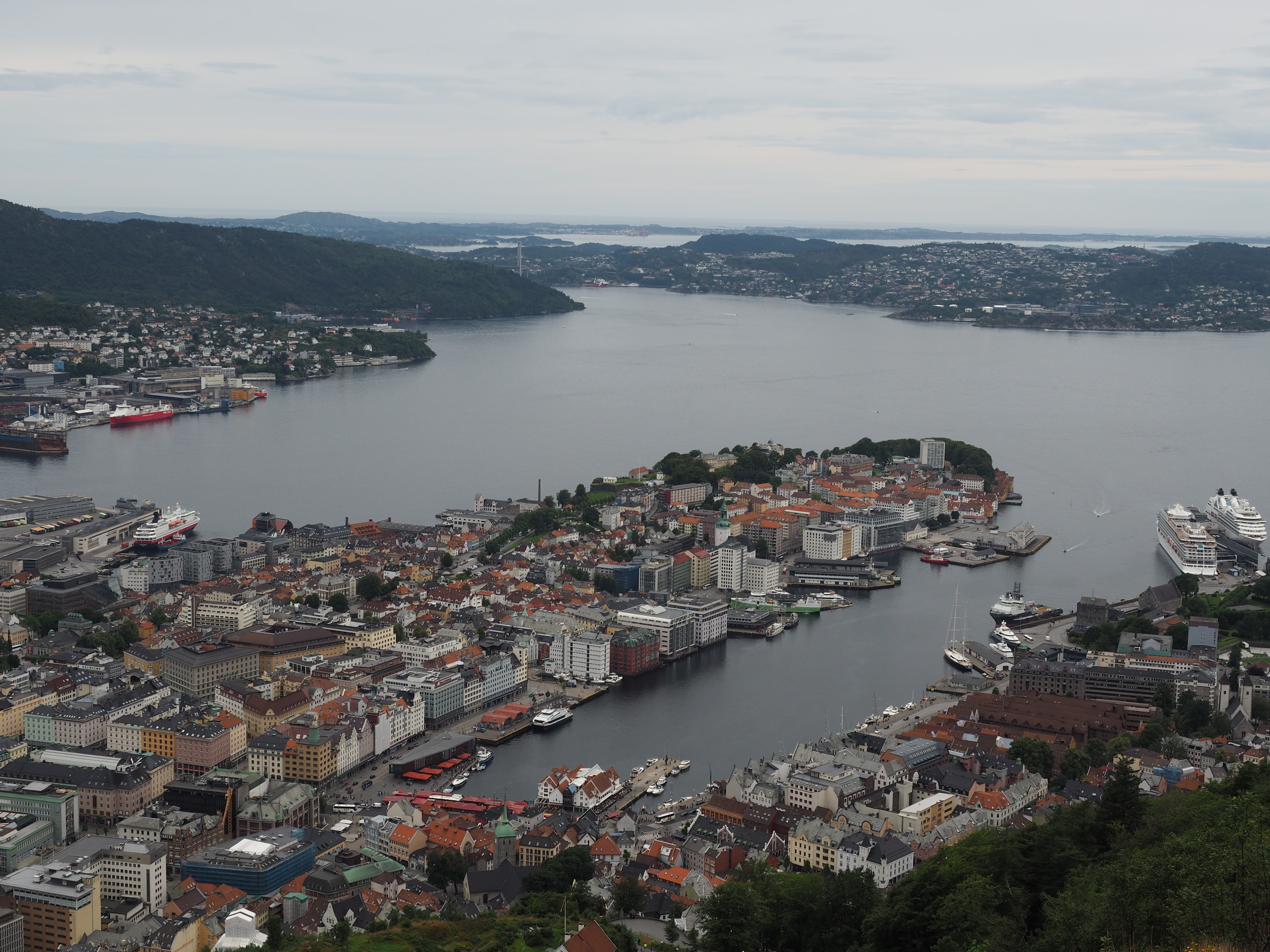 Visit the fish market and stroll through Bergen´s historic harbor area, fronted by wooden houses dating back as far as the 1300s. You can also take a trip up nearby Mount Fløyen via funicular tram. Enjoy views over the city and surrounding mountains, and even spot your expedition ship, MS Spitsbergen, docked below.

Lerwick is the main port of the Shetland Islands, and by far the northernmost town in Scotland. Founded in the 17th century as a fishing port, Lerwick today is a bustling, cosmopolitan town. The old waterfront is still active with visiting yachts and working fishing boats. The area boasts some of Shetland's most attractive scenery and an extraordinary concentration of archaeological sites, including two remarkable Iron Age villages. 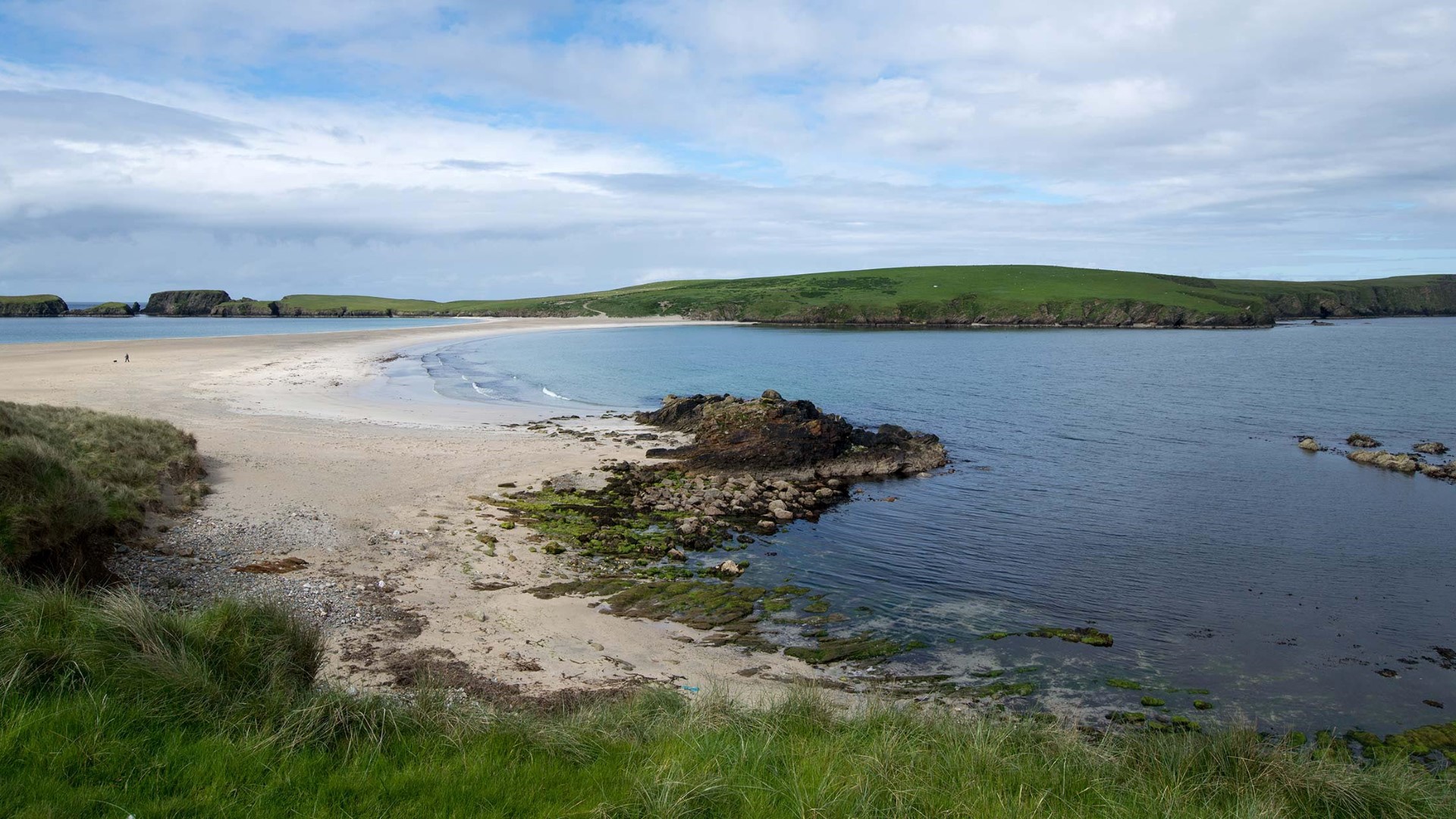 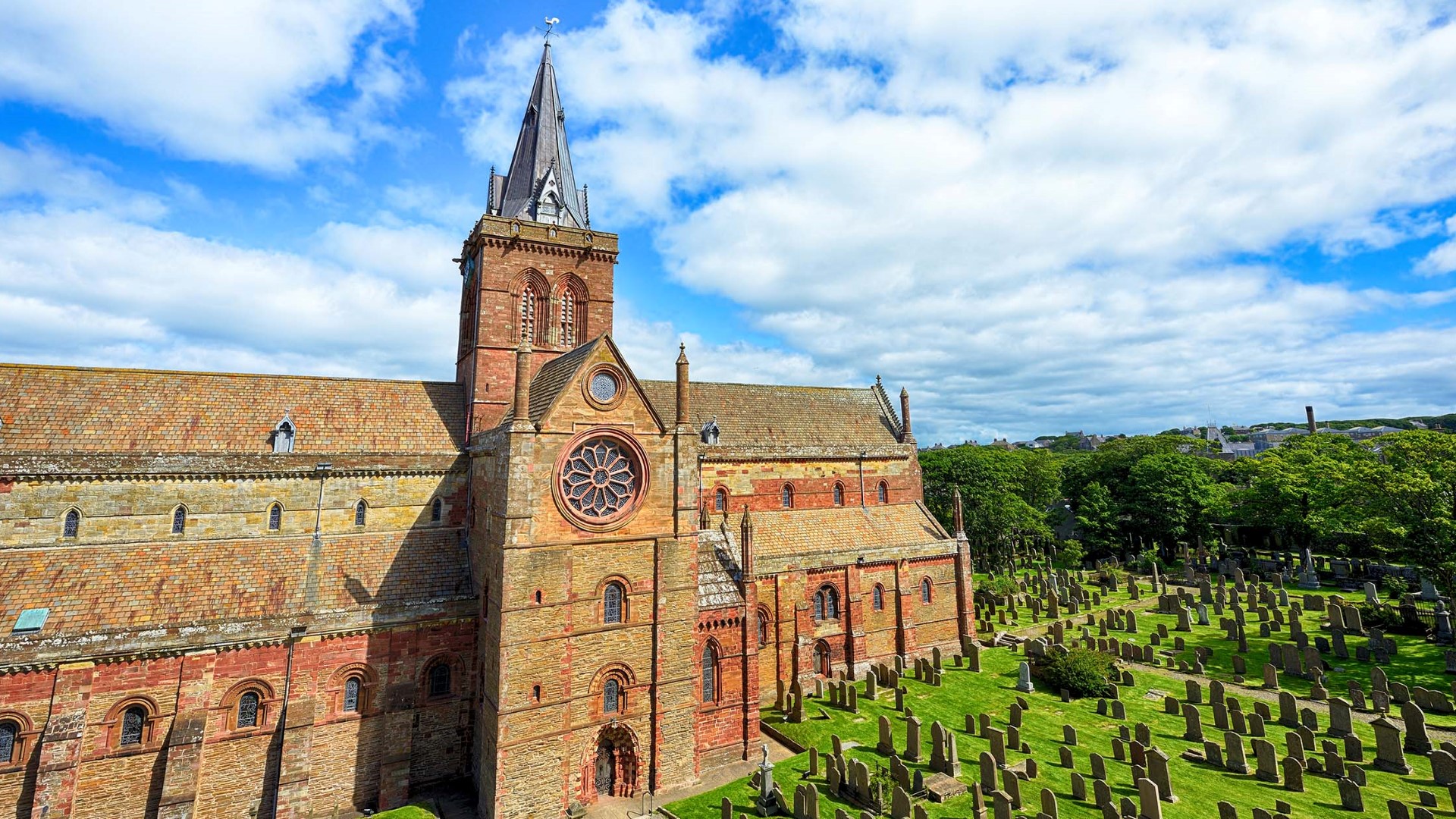 Kirkwall is the largest town and capital of the Orkney Islands. The first mention of a settlement here is in a saga from 1046, and the name Kirkwall derives from the Old Norse “Kirkjuvagr” (Church Bay). Today, Kirkwall has a population of 8,500, and is one of the most attractive and well-preserved small towns in Scotland The community is dominated by the famous St. Magnus Cathedral. A local saga tells the story of how Magnus, kidnapped from the islands, refused to fight with the Vikings or condone their violence. Magnus eventually returned home, only to be put to death for his pacifism, and the church was named in his memory.

Day 5 – Capital of the Isle of Lewis in the Outer Hebrides – Stornoway, Lewis & Harris (Scotland)

Originally a Viking settlement, Stornoway is the main town of the Western Isles and the capital of the Isle of Lewis & Harris, which is the largest and most northerly of the Outer Hebrides. A bustling harbor and waterfront with museums and art galleries is overlooked by the handsome Lews Castle, which we invite you to explore with us. Further afield are mills and cottages where durable Harris Tweeds are woven. Discover tiny folk museums, the world-famous Callanish Standing Stones, and the mysterious Carloway Broch - the best preserved fort in Scotland dating back more than 2,000 years. 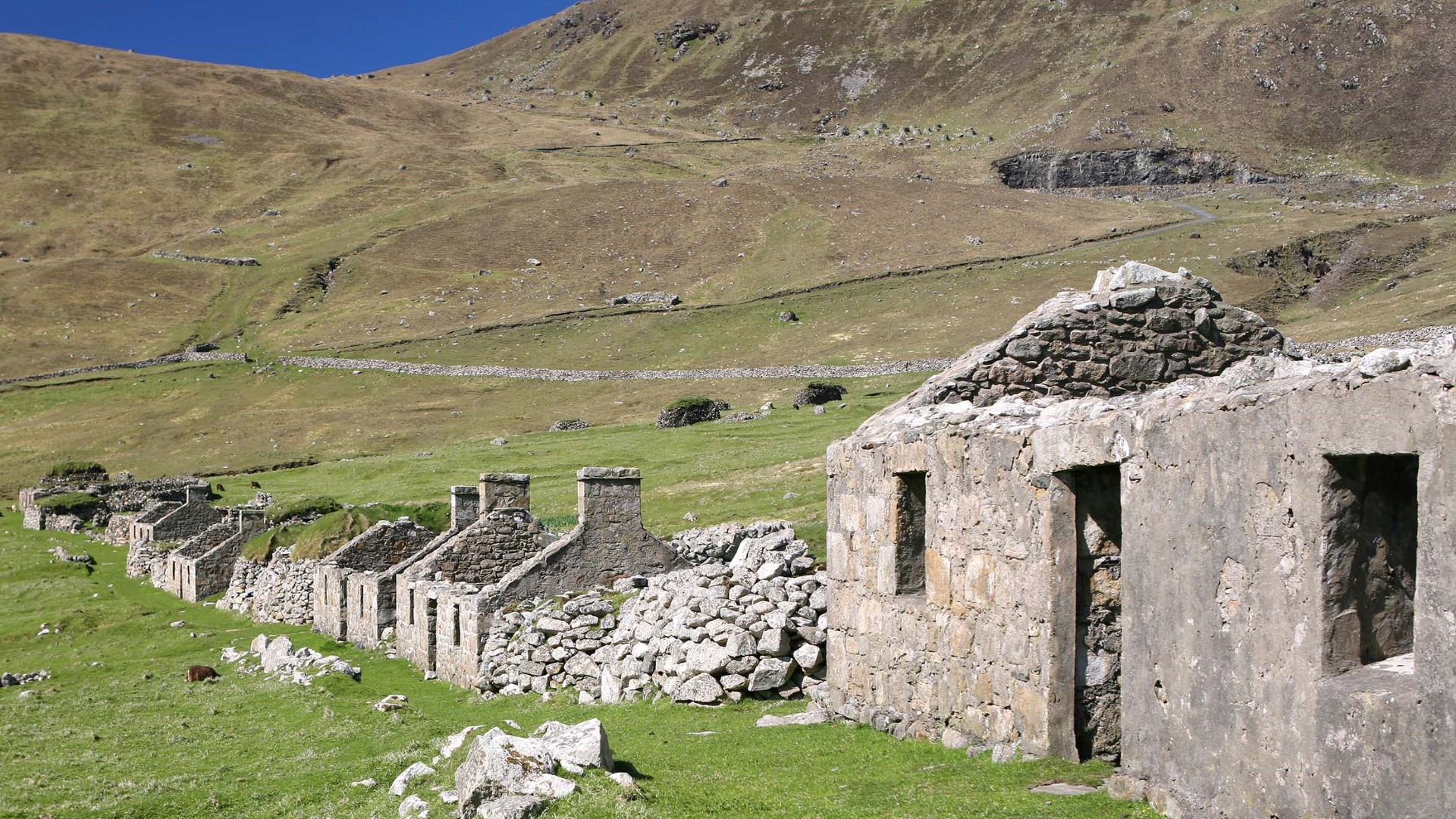 Any visit to this distant and wild archipelago, with its breathtaking sea cliffs, is totally weather-dependent. As a UNESCO double World Heritage site and “jewel in the crown” of the National Trust for Scotland, it is an unforgettable experience. The outlying sea stacks and islands, the remains of a volcanic crater, provide ledges for thousands of nesting seabirds. Minke whales are frequently seen in the swirling waters around the archipelago. Once home to Britain’s most remote island community, it was evacuated in 1930 at the islanders’ own request after 5,000 years of continuous habitation. The tiny museum that remains is a record of how hard life was on this exposed island.

Surrounded by the high peaks of the Skye Cullins, Loch Scavaig leads to one of the most romantic and dramatic lochs in Scotland – freshwater Loch Coruisk. Painted by Turner and a popular destination for the Victorians, this is a powerful landscape promising great hiking and kayaking. We next head to the Isle of Canna, which is the most sheltered of the “Small Isles” and known as “the Garden of the Hebrides.” Linked by causeway to the island of Sanday and its puffin colonies, Canna is green and grassy with delightful flora and butterflies. Once privately owned by Sir John Lorne Campbell, the island is now the property of The National Trust for Scotland.

World famous for its religious connections, Iona was settled in 563 AD by the Irish missionary, St Colomba. The much-restored Abbey remains a place of pilgrimage and peace. Wide views from the beach, known as “The Bay at the Back of the Ocean,” stretch west towards the Outer Hebrides. We will explore the Treshnish Isles, a group of distinctive volcanic islands that are home to a wealth of wildlife, from nesting puffins to colonies of kittiwakes, razorbills, guillemots and Atlantic grey seals. Fingal’s Cave, immortalized by Mendelssohn’s glorious “Hebrides Overture,” is on the cave-riddled isle of Staffa, one of Scotland’s most famous islands. The basalt columns here are a northern extension of the Giant’s Causeway. Discovered by the Vikings and noted in 1772 by Sir Joseph Banks, the island has been visited by Queen Victoria, Sir Walter Scott and Samuel Johnson. Staffa is best viewed from the sea where the color of the water within the cave and the rising columns are at their most impressive.

Known as the ‘Gateway to the Isles’, the little town of Oban reached its heyday when the railway arrived, adding to its life as a busy fishing port. Now a popular holiday spot, the Victorian buildings cluster round the port, ferries come and go, heading out to the distant Hebrides. Many cafés have seafood-focused menus, and the distillery provides tours to sample a local dram of whisky. As this expedition voyage is still under development, our stop in Oban may change to another exciting destination in this area of Western Scotland. Once we have confirmed the final details in the itinerary, we will update this information accordingly.

Once the seat of the MacDonalds, Lords of the Isles, this is “whisky island,” world renowned for its peaty single malt whiskies and many distilleries. A stop-off for wintering geese and migrating birds, Islay offers good bird spotting. In the charming little town of Bowmore, there are a handful of small shops, an interesting round church with no corners, plus superb cliff-top walks and a well-known golf course.

A seaside town, the pretty port of Peel was the 14th century capital and seat to the King of Mann. Winding lanes of merchants’ houses bear witness to the 19th century fishing schooners built here and that traded from Ireland to Shetland. Peel Castle, connected by causeway and reputedly built by Magnus Barelegs, King of Norway, dates from the 11th century. Museums in town display vintage bikes and cars, a direct connection to the modern-day high-speed racing scene on the island. 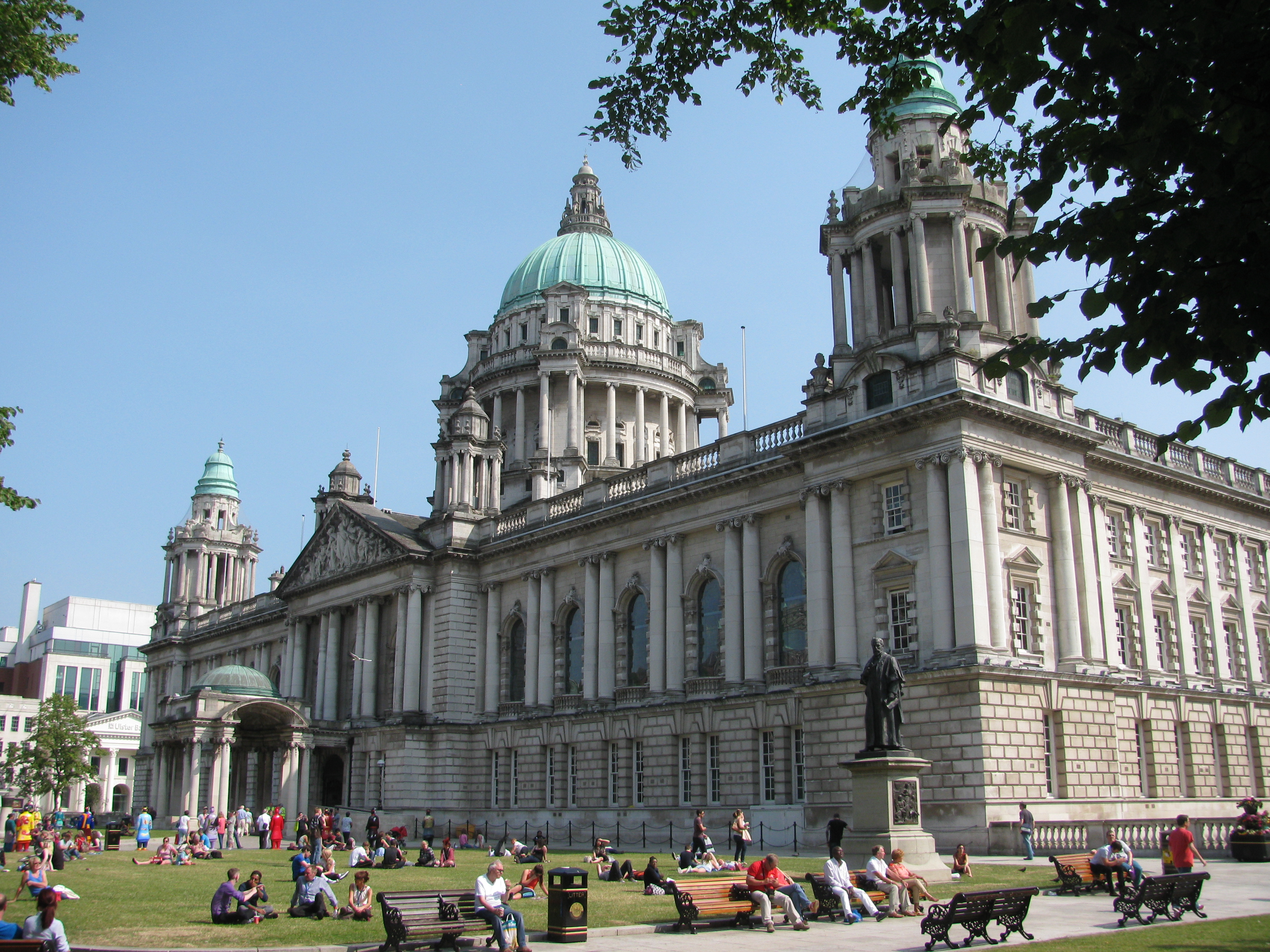 A city of industry and elegance, Belfast is the birthplace of the Titanic, as well as the capital and largest city of Northern Ireland. It is the gateway to a glorious countryside of pretty villages and beautiful rugged coastline with pristine beaches and breathtaking cliff-top walks. Experience Giants Causeway, hike through spectacular scenery or explore what impressive Belfast has to offer. 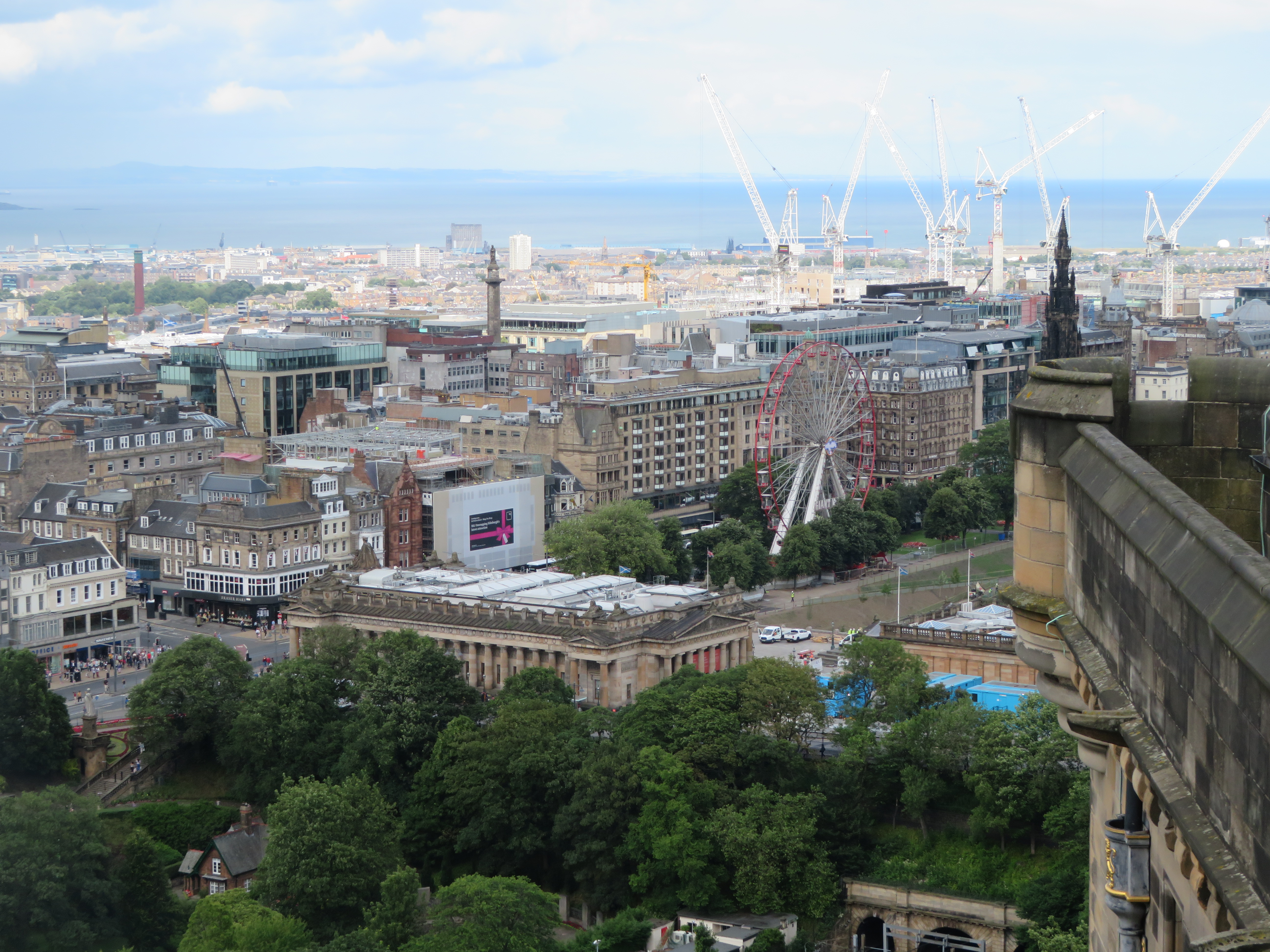 Our voyage ends in Glasgow (Greenock), which means “Dear Green Place” in Gaelic. Glasgow boasts over 90 parks and gardens, is famous for its Victorian and art nouveau architecture, and is home to such institutions as the Scottish Ballet, Opera and National Theatre. This is definitely a city you’ll want to explore more of before you head home.

Included in Your Expedition

• Expedition cruise in a cabin of your choice

• Complimentary Wi-Fi onboard. Be aware that we sail in remote areas with very limited connection. Streaming is not supported.

• Complimentary reusable water bottle to use at water refill stations onboard

• Use of the ship’s hot tubs, panoramic sauna and indoor gym

• Loan of boots, trekking poles, and all equipment for activities

• Expedition photographers help with your camera settings before landings

Not Included in Your Expedition

• All planned activities are subject to weather and ice conditions

• Excursions and activities are subject to change

If you'd like to schedule a consultation, please click this link.  If you haven't already signed up for my weekly small-ship experience newsletter, please complete the form below: